Halifax have had another really consistent season in the championship. Young coach Richard Marshall has worked wonders on a low budget and boasts some really exciting young talent in his side. Former Halifax and Salford legend Colin Dixon’s grandson Chester Butler is making a real name for himself and will definitely be a player to watch. The vastly experienced Scott Murrell teams up in the halves with Ben Johnston and Fax are not short of pace with speedsters Kieran Moss, Will Sharp and Ben Heaton. Former Salford player Steve Tryer has become a real points machine in West Yorkshire and his now in his 6th season at Halifax.

Salford last met Halifax in a competitive fixture back in 2015 in the qualifiers. The Red Devils won away in a highly entertaining match 28-50. Niall Evalds grabbed a hat trick. Salford beat Halifax home and away in the 2008 Championship season.

Halifax were relegated from Rugby League’s top flight at the end of the 2003 season. The club have a long and proud history leaving there historical home at Thrum Hall at the end of 1997. Since then they have shared The Shay with football team Halifax Town.

It’s been a tough start to the Qualifiers for the West Yorkshire side with two defeats. At home to Toronto 0-14 and away at Toulouse 28-6.

As the Wolfpack pack found a few weeks ago Halifax are a real tough nut to crack on there own ground, Salford will need to be switched on to get the result on Sunday. 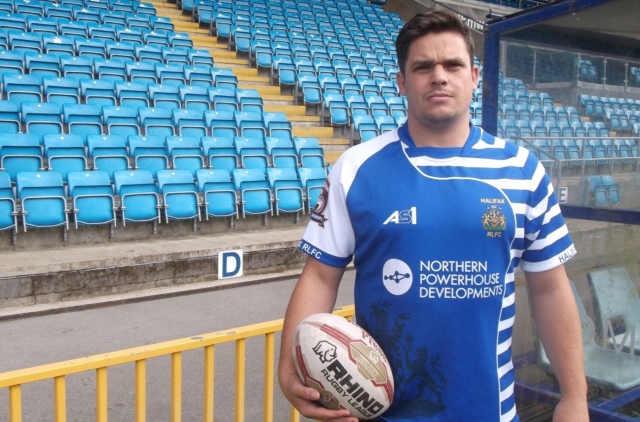 Halifax’s veteran half back Scott Murrell has bags of experience

Colin Dixon a hero for both Salford and Halifax

2002 was a real season of struggle for Salford. With young coach Steve McCormack in charge things didn’t go to plan. Steve was eventually replaced by Karl Harrison mid season but the writing was on the wall. Salford had to beat Castleford on the final day to stay up but lost 10-20 at The Willows and we’re relegated. A season with quite a lot of big defeats and dark days which our loyal supporters would rather forget.

Easter time though was a bit more memorable. A good solid win over Warrington on good Friday at The Willows 31-18, Salford travelled over the pennies to Halifax on Easter Monday.

A damp and miserable day was in store as the two sides came out for kick off.

The Reds made an excellent start and played the conditions really well,scoring two tries in the opening six minutes.

Three minutes later, from another Bobbie Goulding high kick, Mick Wainwright outjumped Cardiss to catch the ball and touch down.

Goulding stepped up on both occasions to convert the tries.

Halifax tried to respond but Gavin Clinch saw his effort disallowed for a double movement and moments later Goulding kicked a drop goal to put Salford 15-0 up at half time.

The home side finally broke their duck five minutes after the restart.

Clinch went over for a try after good work by Colum Halpenny and Andrew Dunemann while Danny Tickle added the goal.

In the 63rd minute, Jamie Thackray took the ball close to the Salford line and went over with four Reds tacklers trying to hold him back.

Tickle added a second goal but Salford held on for their first back-to-back victories under coach Steve McCormack.

Salford have made a perfect start to the Qualifiers with two excellent wins over Hull kr and Widnes. Halifax have lost both there games to Toronto and Toulouse. The Red Devils will start favourites but Richard Marshall has moulded a hard working side who can play some clever stuff. In what has been an enthralling Championship campaign Halifax’s fourth place finish was a great achievement. It promises to be an exciting encounter if the last qualifiers meeting has anything to go by. Three years ago saw Salford triumph 28-50. Greg Johnson, Niall Evalds and Ben Jones Bishop scoring hat tricks.

The action gets under way at 3pm

As the 2019 Rugby League season draws ever closer what can Salford Red Devil’s supporters expect? With the structure change […]

Ian Watson described it as a weird feeling at the final hooter. He was obviously disappointed with the score line […]