Turn the clock back to 1980! Two Tone topped the music charts and Hull Kingston Rovers were one of the best and most feared sides in the Country. Along with City Rivals Hull they ruled the roost for a number of years. With three League Championships in a six year spell the pinnacle of there dominance perhaps came on the 3rd May 1980. The State Express Challenge cup at Wembley Stadium. The City of Hull was left deserted as 95,000 supporters travelled to the capital to watch Rovers beat bitter rivals Hull 10-5 to lift the famous trophy.

Almost forty years later the game has seen many changes. So have The Robins. Through the late 80s and 1990s promotions and relegations came and went leaving Hull Kr a sleeping Giant of yesteryear.

Justin Morgan started the revival leading Rovers to promotion to the Super League in at the end of the 2006 season. The club built steadily with a number of appearances in the end of season Playoffs. In 2016 Salford beat Hull Kr in an unforgettable Million Pound game.

Since then legendary Australian coach Tim Sheens has put together a competitive side in East Hull. A good mix of youth and experience in the ranks with there home ground always tough to travel to for the opposition. 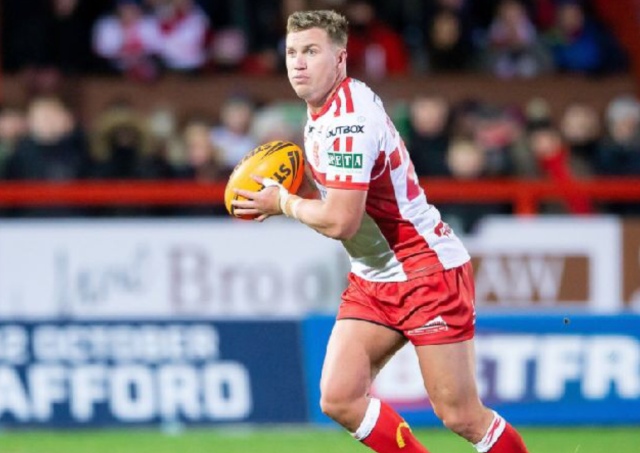 New signing, half back Josh Drinkwater

Rovers won a pulsating Hull derby on the opening night of the season before a battling display away at Warrington. They picked up there second win last weekend at home to London Broncos.

Old stager Danny McGuire and Josh Drinkwater look a very useful half back pairing. With former Swinton star Chris Atkin and the versatile Danny Addy in the squad Tim Sheens has plenty of options and cover if needed.

Here are a selection of players to have represented The Robins and The Red Devils,

Chris Charles, a real stalwart for both clubs.

A match to remember

After two excellent victories over Huddersfield and Hull Fc, Salford made it three on the spin on a memorable afternoon at Craven Park. Glorious sunshine greeted the two sides at kick and a shirt sleeve crowd witnessed a tight low scoring first half. Rovers led 12-4 at half time but what ever Salford coach Iestyn Harris said to his players at the break certainly transformed them in the second half.

The Reds we’re rampant tearing there hosts to pieces with some fabulous attacking Rugby. The Robins had no answer to Salford’s punishing attacks.

There’s always something special about a Saturday afternoon road trip following Salford. A trip to East Hull is one of my favourites. We’ve had some tough days at Craven Park and on the other hand we’ve also had some memorable and unforgettable ones.

After last Sunday’s wake up call against Leeds Ian Watson’s Salford side will be looking to put things right.

Hull Kingston Rovers are a side full of confidence after two home wins and a creditable display at Warrington were the score line some what flattered the Wolves. Early season signs suggest The Robins are going to be a match for most this season.

After naming unchanged sides for three matches running will Ian Watson make changes this Saturday? Tyrone McCarthy, Daniel Murray, Jake Bibbby and Greg Johnson are all waiting in the wings for there first appearances of the season. Ed Chamberlain is nearing full fitness too.

This promises to be another exciting contest between two sides who like to play an expansive brand of Rugby League.

The action gets under way at 3pm.

Half A Job Salford Pay The Price Again.

It certainly didn’t feel like the month of June as both sides marched out for kick off. Heavy rain most […]