2018 was a year of mixed emotions for the Catalans Dragons. After a poor start to the season the French side seemed to turn the corner at The Magic weekend in Newcastle, beating Salford 26-10. The Dragons form then went through the roof. The signing of half back Josh Drinkwater proved to be a master stroke by coach Steve McNamara. Catalans roared to The Challenge Cup final destroying St. Helens in the semi finals before lifting the famous trophy with a heroic performance in the final against Warrington. A very respectful 7th place League table finish after the Super Eights capped the season off. 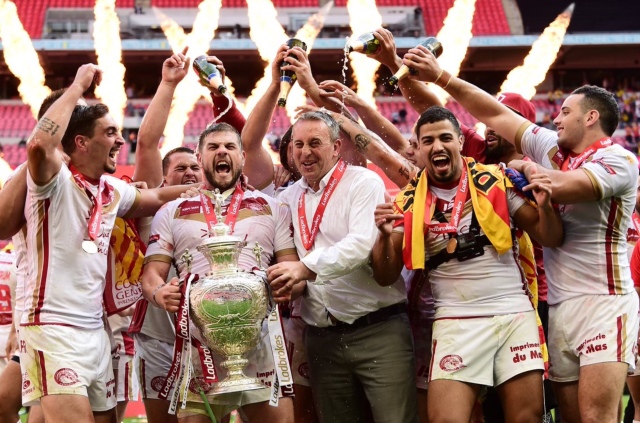 The Dragons lift The Challenge Cup In 2018.

Salford’s last League victory in The South of France came back in 2011. Since then though we’ve had some heavy defeats there with The Dragons getting to the 40 point mark on 5 occasions. You get the feeling that if Ian Watson’s men are going to triumph this weekend then defence will be crucial.

In the close season Catalans were very active on the recruitment front. High profile signings Sam Tomkins and Matty Smith joined there already talented squad. Highly rated Widnes forward Matt Whitley was also snapped up by McNamara. The 23 year had really stood out for The Vikings in a struggling side but has already become a regular for The Dragons. Many are tipping Whitley for Full international honours in the near future having made his debut for England knights in 2018.

With a very big aggressive pack Catalans certainly have the strike players to cause any team problems. Fouhad Yaha, David Mead, Kenny Edwards are all men to watch. Tomkins is of course a huge signing but for me when Tony Gigot is on his game he is almost unplayable.

Salford have had two excellent victories on there travels already this season beating Huddersfield and Hull Kr and will have to be at there best this Saturday. 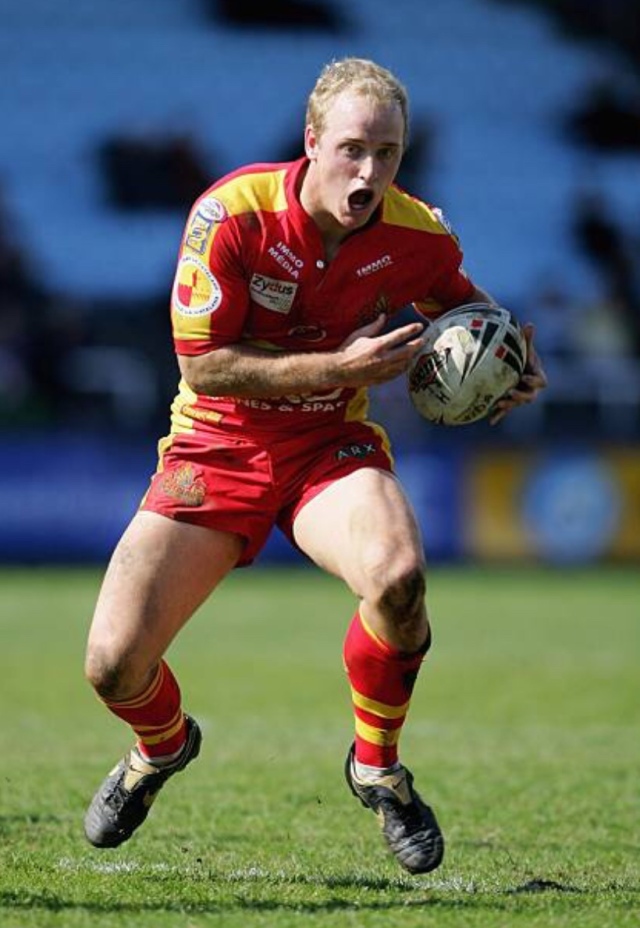 Michael Dobson, a star for both clubs.

The 2015 season turned out to be a real rollercoaster ride for Salford and there supporters. After a tough start with defeats at Warrington and at home to St. Helens, The Red Devil’s clicked in to gear. Two from two at Easter with a fantastic display at Huddersfield on good Friday had the supporters believing again. Easter Monday saw the visit of Wigan to The AJ Bell Stadium in what turned out to be a thrilling match. Salford won 24-18 to sit proudly in third place in the League table. Rewind a few weeks earlier to Perpignan. Iestyn Harris’s Salford side played in one of the most memorable matches Super League has seen.

In a real end to end tussle The Dragons responded swiftly with Tries from Zeb Taia, Vincent Duport and Ben Pomeroy to make it 22-18 at the break.

Catalans added further tries by Pomeroy, Michael Oldfield, Elliot Whitehead and Ian Henderson, but Theo Fages, Rangi Chase and Paterson kept the Devils alive in a pulsating match which must of been a nightmare to watch for the coaching staff of both clubs.

With just one minute remaining The Dragons led 40-38. Referee Phil Bentham awarded Salford a penalty, much to the disgust of the home supporters.

Josh Griffin held his nerve to convert the two points on offer to grab a draw 40-40.

After the dizzy heights of third place at Easter, injuries and suspensions hit Salford hard. Coach Harris lost his job and was replaced by Ian Watson.

The Red Devils finished the regular season in 11th place.

Watson injected some grit and self belief in to his side leading them to safety through the Qualifiers winning 5 games from 7 matches.

The teams that night in France were;

The Red Devils will be without captain Lee Mossop after he picked up an injury in last weeks match against St. Helens. George Griffin looks set to return to the squad after pulling out very late on last Thursday. Mossop’s absence could pave the way for Daniel Murray who impressed in his first appearance of the season at Hull kr. Tyrone McCarthy is also available for selection. New signing Adam Walker has another week of his ban to serve.

The Dragons are certainly a tough prospect on there home pitch. From there four games so far they’ve beaten Huddersfield and Warrington at the Stade Gilbert Brutus. Meanwhile they have looked a little vulnerable on the travels and were well beaten at Castleford in round one as well as a 22-12 defeat at Wakefield in round three.

Perpignan is a tough place to go for any team though, Catalans have a fanatical home support who can really lift there side. A good start will be vital for Salford because once The Dragons get on a roll they can be very difficult to stop. McNamara’s men will be full of confidence after last Saturday’s 23-22 triumph over Warrington.

St.Helens was the venue for round two of the Super league season. Salford had met Hull twice last season behind […]

2023 Supporters Trust Membership is now on sale for just £10! With a £5 optional donation to the Pathway at the club. Dismiss