Many pundits and supporters weren’t impressed with Wigan in 2018. Despite the flair Warrington, St. Helens and Castleford played with it was the Warriors who eventually took the silverware with victory in the Grand final.

Shaun Wane’s side had a resilience about them, a real doggedness to grind teams down.

In the close season Coach Wane has left for a job in Rugby Union. Talisman Sam Tomkins has joined Catalans. Pack enforcer Ryan Sutton has moved to The NRL to play with Canberra Raiders, but perhaps the man Wigan are missing the most in 2019 as they struggle to find any sort of form is John Bateman. Last year Bateman really was the glue that held the Warriors together. Without him they look a shadow of the team that triumphed at Old Trafford. Along with Sutton, Bateman is also now with The Green Machine (Canberra) for the new NRL season. The Raiders now have an exciting international quartet of English players in Josh Hodgson, Elliot Whitehead, John Bateman and Ryan Sutton.

Adrian Lam has the task of guiding Wigan threw the next 12 months before Shaun Edwards takes charge next season, although some doubt has been cast over Edwards joining the Warriors just recently. With the poor start to the season the pressure is certainly on to start getting results.

The Warriors have lost four league games on the spin with just one victory from there six matches so far. Salford will have to be on there guard though against a team littered with international players.

Over the years there have been plenty of players who’ve been at both clubs at some point in their career. Here are a few of them,

Salford had made a fantastic start to the season and this victory propelled us up to second place in The Super League table. Two impressive wins in the opening two rounds of the season 6-24 away at Warrington and a 16-0 home win against new boys Catalans Dragons had been an impressive start for Karl Harrison’s side.

This particular night back in 2006 was pretty special. There had been quite a bit of snow during the day leaving the pitch with a covering of white. Fortunately the match passed a 5pm pitch inspection.

Salford’s defence was composed and organised containing Wigan for large parts of the contest.

Simon Finnigan playing at loose forward crossed for the games first try to put the City Reds in front.

The prolific Pat Richards touched down for Wigan to cut there deficit before Andy Coley restored Salford’s lead crashing over from close range off Malcom Alker’s neat inside pass.

David Hodgson streaked away and raced forty metres to score a late try against his former club to seal an emphatic nights work for Karl Harrison’s side.

The Salford side of 2006 typified there coach, plenty of grit, determination and hard work. 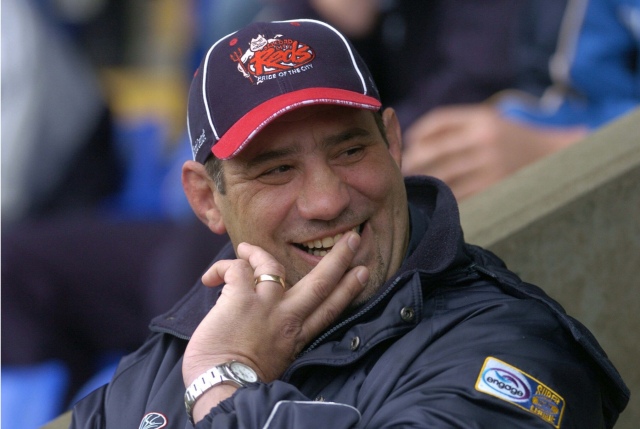 Despite Wigan’s poor start to the 2019 season you only have to take a quick glance at there squad to see this match will be a difficult assignment for Ian Watson’s men. As we saw against Leeds just over a month ago, when good players click and play as a team it’s a tough job to stop them.

Salford haven’t had much success in this fixture since moving to The AJ Bell Stadium but after a real honest effort at Castleford last Sunday will be confident and raring to go in front of there home supporters.

Looking back to the friendly match between the two sides in January Salford were exposed at times by Wigan’s pace on the edges. Oliver Gildart is a classy centre and the Warriors have some of the best finishing wingers in the Super League competition.

Oliver Gildart is one to watch in the Wigan side.

Salford have some exciting players of there own though, Ken Sio is mr reliable, Jake Bibby with four tries in his last two games has looked outstanding. Jackson Hastings continues to impress in attack and defence and there is no doubt Jackson will want to put one over the champions on Sunday.

This is a game where the forward pack needs to get on top and dominate. If the pack lay the platform for Hastings and Robert Lui as they did in Perpignan Salford can take the points.

This is a game not to be missed, a Sunday afternoon and a mouth watering fixture in prospect.

These two sides will meet each other twice in a week. The Super League match takes place this Tuesday evening […]