It’s been quite a strange 2019 season so far for Salford and a little frustrating at times. A very disappointing result at last weeks Magic Weekend against Hull kr despite out scoring the Robins four tries to three. Narrow defeats away to St Helens, Castleford and Wakefield as well as two very close home loses to Wigan have certainly hampered Salford’s progress. The Red Devil’s to their credit still sit in seventh position just two points off the play offs.

Consistency is the name of the game in Super League and this season the race for the top Five looks wide open. You could argue that St Helens and Warrington look nailed on to finish in the top three but the other places are up for grabs at this moment in time.

Hull Fc are probably the biggest conundrum in the league. With nine wins and seven loses so far Lee Radford’s Airlie Birds can go from brilliant to plain awful one game to the next. At the Magic weekend a 55-2 hammering At Anfield against Huddersfield must of bust a few betting coupons. The previous week saw a 12-19 victory away to Warrington. Fast forward to The Challenge Cup weekend a few days ago Hull put 50 points past the in form Catalans Dragons to reach the Semi Finals.

The two sides have met once so far this season at The AJ Bell Stadium on the 7th April with Hull coming out on top 16-23.

Salford’s form recently has been very unpredictable, with a real solid Easter programme behind them followed by wins over London and Leeds confidence was high. With three defeats on the spin in cup and League now is not the time to panic but Ian Watson knows things need putting right. The Salford coach was far from happy speaking to the press post match last Sunday.

Victory at Hull would be a real boost with two home matches to follow in June.

One positive the faithful Salford supporters can take is their sides excellent away form so far. With five wins on the road so far this season and some terrific performances on the road it almost seems like the side play a different game on their travels. Perhaps it’s a different pressure away from home, I am not to sure.

The KCOM stadium can be a quite daunting atmosphere if the home side get on top early. This game looks like the perfect opportunity to get Salford’s season back on track though. Their is now doubt The Red Devils will start as under dogs but that’s a tag they have got used too and seem to thrive on.

Since Hull’s move from the Boulevard to the KCOM Salford have managed just one victory with nineteen defeats in the league. Two very thrilling cup ties have been won by Salford though a very late try in 2009 and a thrilling golden point drop goal a few years later. Some of those league defeats have been very heavy and made painful viewing for the supporters. The one victory we did get was most certainly a memorable one 18-54 in 2017. A fantastic performance and a Watson coaching Masterclass! 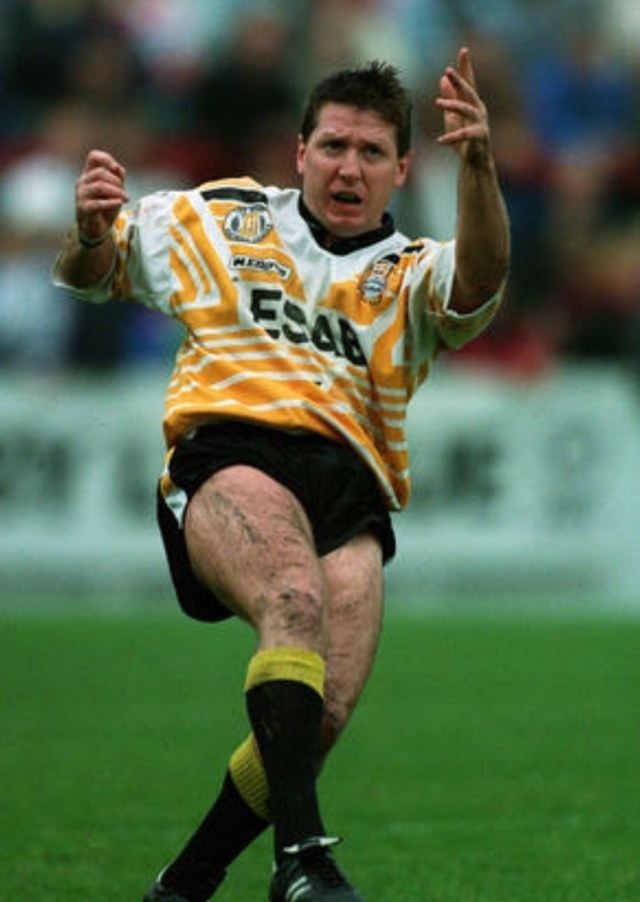 Craig Coleman played for both clubs in the 90s.

Although the victory in 2017 was a tremendous performance and felt like a bit of a dream to anyone who was there that night I am going to rewind thirteen years to our 2006 clash. A really good year for Salford under coach Karl Harrison. Quite a number of games were won and lost by one point and the odd score. The season was littered with thrilling, nail biting matches and this one at The KC Stadium as it was called back then was a cracker as well as being hard to stomach for us poor Salford supporters.

The previous week a thrilling 35-34 victory at The Willows against Warrington had the old ground rocking. The City Reds were well on course for a play off spot.

Hull were also riding high in the League table and would go all the way to Old Trafford to contest the Grand final a few months down the line.

The first half was a very cagey affair, Hull scores a try from Danny Washbrook and Salford responded with one from Simon Finnigan. The goal kicking of Paul Cooke just kept the home sides nose in front 8-6 at half time.

At 10-10 the match was anybody’s, Luke Robinson and Andrew Dunemann we’re both capable of kicking drop goals. Dunemann had kicked the game clincher the previous week against Warrington.

Hull were the side to take the points this time around. Richard Horne dropping the goal late on to sneak an 11-10 win for the home side.

It was certainly harsh on a Salford side who had tackled themselves to a stand still with a magnificent defensive display conceding just one try.

With slow starts in his sides last few games Ian Watson will be looking for a response this Friday. His side need to start well and build some confidence back up. As I’ve already stated previously Hull are probably the most unpredictable team in the Super League. With Albert Kelly and Marc Sneyd playing together in the halves Jake Connor is equally at home in the three quarter line. All three are very dangerous players. Hull have a big strong back line and their is also plenty of size in the pack. They like to off load and this is something Salford need to be aware of.

The Red Devils have plenty of attacking threats of their own. Jackson Hastings and Robert Lui will be looking to dominate on the back of a mobile pack of forwards. So far Pauli Pauli has been a clever signing coming in on loan from Wakefield. His strength and size running wide out offer Salford another dimension. Another strong runner is Josh Jones, an 80 minute player who will be a huge loss to Salford next year when he leaves to join Hull.

The Red Devils proved at the Magic Weekend when they move the ball they can post spectacular tries. With Ken Sio on the wing finishing off two well taken tries last time out against Hull Kr.

With constant speculation of player movement for the 2020 season their is no doubt that can be unsettling for coaches and players. With so much to play for this season and the race for the top five being wide open this group of players Salford have could achieve something special. Perhaps their is a slight danger of the season slippy away and being a tale of what might have been.

Victory for Salford on Friday night would definitely kick start the season and with two home games coming up next in June things could change considerably over the next month for good or bad reasons.

Ian Watson and his Salford side arrived in London on the train after a first class trip from Manchester. It […]