Niall Evalds and Paul Charlton are two players from very different eras and two players who’s styles differ in many ways. This is not about comparing them to each other as that would be very unfair. This is proudly celebrating two Salford players and Niall and Paul’s try scoring exploits from the position of fullback

As we stand with three rounds remaining of the regular season in 2019 Evalds is leading the way as joint top try scorer in The Super League with 21 tries. Add to that his Challenge cup tries against Rochdale Hornets (4) and Hull Kingston Rovers (1) Niall is not too far off the great Cumbrians world record.

In the late 1960s Brian Snape The Salford chairman was slowly building something special at the Willows. A vibrant social club off the pitch and a very useful side on the pitch, Salford were on the up and The Willows was the place to be.

Paul Charlton on the burst in the 70s.

Paul Charlton signed for Salford from Workington in the Autumn of 1969 and made his debut against St. Helens at The Willows on the 29th October. Salford won the match 16-12 with captain courageous Chris Hesketh scoring two tries. Charlo soon became a huge favourite with the supporters. A super fit athlete and in fact a fitness fanatic who would jog and cycle to training. A very strong runner who was notorious for beating the first man when returning the ball. His defence was perhaps his greatest attribute. A fantastic tackler and as brave as they come.

Paul scored 31 tries in the 1971/72 season for Salford, one for Cumberland and one for Great Britain a world record for a full back.

One of those tries came in the Lancashire cup final victory over Swinton at Wilderspool. A match that Salford won 25-11. A championship winner with Salford in the glorious 1973/74 season. Paul returned to his native Cumbria in 1975 to rejoin Workington Town as player coach where his outstanding performances continued.

Workington remarkably reached The Lancashire cup final four seasons running. They were beaten in three but managed to beat Wigan in the 1977/78 season 16-13 to lift the famous trophy. Paul was a World Cup winner in 1972 with Great Britain and played in all three Ashes Tests on the 1974 Tour against Australia.

Niall Evalds maybe a Yorkshire boy but in many ways is now considered an adopted Salfordian. Coming through the academy ranks Evalds made a try scoring debut for Salford in 2013 away to Catalans Dragons. In the early part of his professional career time spent on loan at Oldham and Barrow seemed to benefit the young player massively. 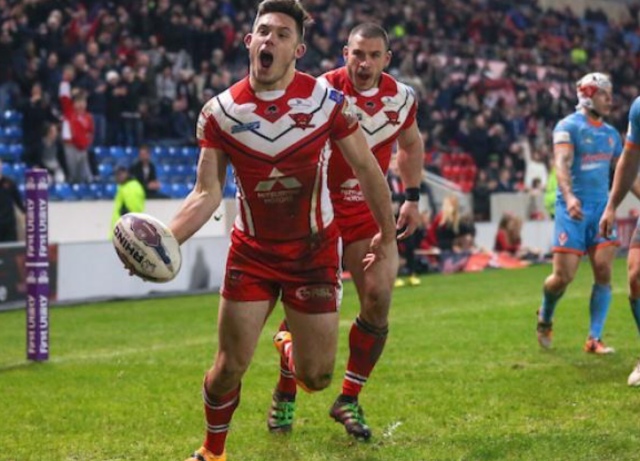 A wonderful support player with plenty of pace Evalds sometimes seems to glide across the pitch with his agile running style and sublime footwork. The signing of Gareth O’Brien a few seasons ago saw Niall move to other positions amongst the back line. Since O’Brien left for Toronto Wolfpack in March 2018 Evalds has again made the fullback position his own. After a very solid season last year an international call up to the England knights gave Evalds the experience of a Tour in Papua New Guinea. On his return to the Salford side for the start of this season we saw a renewed confidence in Niall as he looked unstoppable in the opening round of the league campaign scoring a hat trick of tries away at Huddersfield Giants in a 14-34 victory.

On 26 tries Niall is just behind Paul’s record of 33. It’s an outstanding achievement and with three regular season matches left against Warrington(h), Leeds(a) and Hull Kr(h) respectively their is still a chance of yet more tries. If Salford can hold on to a top five place then more matches will be played and Niall could also feature on the international stage come the end of the domestic season.

Here are both Niall and Paul’s playing records for Salford;

As a supporter it’s thrilling to see such a hard working player doing so well. Evalds will be first to admit he still has areas of his all round game to work on and improve but his reputation has risen significantly in 2019.

A very softly spoken guy who is a pleasure to speak to after the match and always has time for an interview.

Having just reached 100 tries for Salford in recent weeks Evalds will no doubt go down as one of The Red Devils top Full backs. In my time of watching Salford over the past thirty years it’s always been a position we have been blessed with. Steve Gibson, Steve Hampson, Garry Jack, Garry Broadbent, Jason Flowers, Karl Fitzpatrick to name a few have all covered the position well and been good servants to the club.

After scoring a sensational hat trick away to London Broncos at the start of August Niall has failed to score in his last two matches. Both these games saw excellent Salford wins at home to Huddersfield and a dismantling of Hull Fc on their on ground. Despite not crossing the try line Evalds was at the heart of the attack on both occasions and most definitely contributed with a few assists. That’s the kind of player he is, laying tries on for team mates sometimes when perhaps he could of scored himself. That’s what makes a team player.

Evalds celebrated a hat trick of tries at Huddersfield in round one of Super League.

I never saw Paul Charlton play but my dad has told me over the years what a fantastic player and hero he was for our great club. For the younger generation of Salford supporters Niall Evalds is carrying on the tradition of super full backs and with a bit of luck he can keep notching the tries up over the coming weeks.

I’d love to see him play for Great Britain one day and with the commitment, attitude and desire this lad has I am sure it’s possible.

Salford RLFC don’t really get the plaudits and respect they deserve. Maybe that’s down to many years of under achievement and mediocrity I am not to sure. As of mid August 2019 we are two points behind second place in the Super League table. Second top point scorers with a phenomenal 724. Joint top try scorer with Niall’s 21. Jackson Hastings is currently second in the running for the Albert Goldthorpe medal as well as being a huge contender for the Steve Prescott Man Of Steel.

For a club with a limited budget and small squad Ian Watson continues to work miracles. Coaching players is one thing on the training ground but managing them as men and people off the pitch is a skill that is hard to come by. Ian has both skills in abundance.

Good luck to Niall for the rest of the season. I am sure Charlo will be smiling at Salford’s current performances.

Thanks to Paul Hulme for providing the Stats on Niall Evalds.

Picture credits are from The Salford City reporter and club programmes.

It was a disappointing Easter for Salford and the supporters. Two defeats away at Warrington and home to Catalans and […]

Super Sarginson Gets Salford Up And Running.

2023 Supporters Trust Membership is now on sale for just £10! With a £5 optional donation to the Pathway at the club. Dismiss