After conceding over a hundred points in the matches against Warrington and Hull Kingston Rovers, Salford arrived in West Yorkshire for Friday’s fixture with Huddersfield firmly nestled behind the eight ball. A terrific defensive display full of grit and determination saw the Red Devils come away with a heroic victory. This seemed against the odds at half time after James Greenwood was shown the red card.

The result has given the club a huge boost. It was great to see Richard Marshall smiling at full time and I must admit I felt quite emotional for him and the players. I didn’t agree with some of Huddersfield coach Ian Watson’s comments in his after match interview but I do understand his frustration. The referee got the wrong player with the red card and that is pretty poor when you have a touch judge and an in goal judge to converse with.

The tackle from Dan Sarginson was clumsy but I don’t think their is ever any malice in Dan’s play. He plays the game at one hundred miles an hour and he is both terrific and terrifying to watch at times. I sometimes shut my eyes when he charges the ball in! I wouldn’t want him to change though, he’s a super player and his attitude lifted the side last Friday along with his enthusiasm. He will now miss the next three matches with another suspension and that is a blow for Marshall.

This weeks visitors Leeds Rhinos have had their last two matches postponed due to Covid issues. After an inconsistent start to the campaign Richard Agar will be hoping to kick start their season on a ground where they have enjoyed plenty of success over recent years. It was slightly disappointing that the match has been switched from Friday to Sunday. That now gives Salford a tough task of backing up on Thursday to play Wakefield before travelling to Hull on the Monday.

Speaking to Richard Marshall earlier this week he seemed to take everything in his stride. He doesn’t seem to let negativity get in the way and always try’s to put a positive spin on things which is a breath of fresh air these days.

Here are a few players to wear the red of Salford and the blue and amber of Leeds.

There was always something special about a game under the lights at The Willows. The smell of winter green and hot dogs on arrival always builded the excitement and anticipation. This game back in 1999 came at a time of struggle for Salford. Andy Gregory had been replaced as coach by Australian John Harvey and results and performances were disappointing.

The Rhinos were 6-16 up at the break before opening up a 6-38 lead in the second half. Then came a thrilling Salford fight back with star stand off Steve Blakeley at the hub of all good things the Reds did. 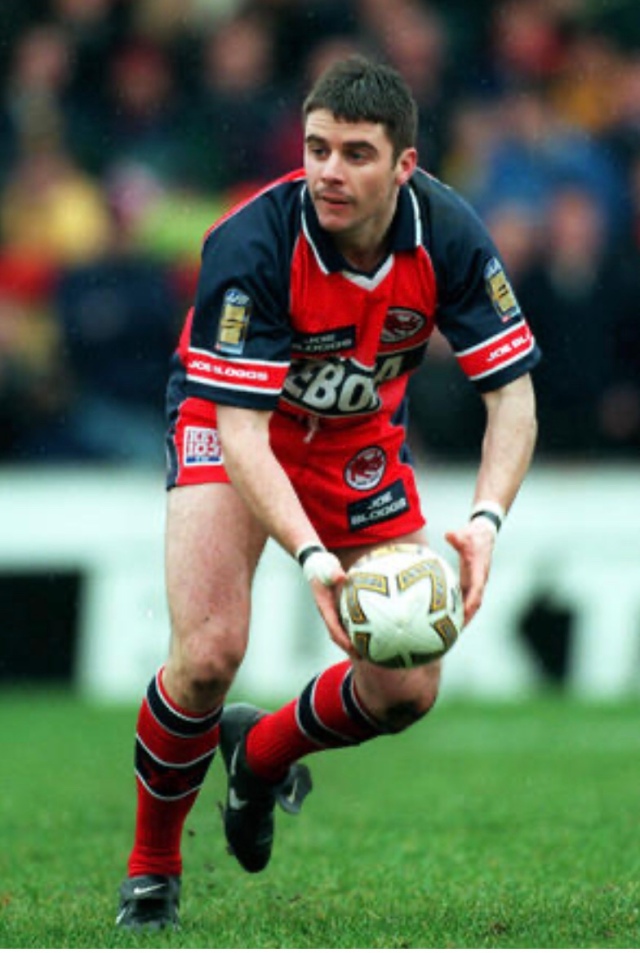 South African winger Mark Johnson who was a real flyer crossed for two excellent tries for the home side. Add to that tries from Craig Makin, Steve Blakeley and Hudson Smith Salford astonishingly got the score back to 30-38.

Looking back if the match had gone on another ten minutes who knows what might have been.

The line ups that night;

After last Friday’s morale boosting victory Salford have an ideal opportunity to really kick start their season in this fixture. Playing in front of their home supporters on Sunday should create quite an atmosphere. The travelling Salford supporters gave the players such an incredible lift at Huddersfield and Richard Marshall even described them as the thirteenth man. In the face of adversity they sang from minute one to eighty. It was a special night in West Yorkshire and one that the supporters will remember for a long time.

Dan Sarginson and Greg Burke will miss this weeks match through suspension leaving Marshall with gaps to fill yet again. One player who was outstanding last week was young forward Jack Wells. He tackled his heart out and ran the ball in strongly all night long. Chris Atkin and Declan Patton worked well together at half back with Andy Ackers was back to his industrious best at hooker. With Sarginson missing it will be interesting to see who starts at full back this week. Two players who won’t be back for Sunday are Matty Costello and Danny Addy. Both should be back in the near future though and could come into contention for the upcoming matches in this busy spell.

Jack Wells has been in terrific form recently.

Leeds have players in the England side on Friday night as well as the Combined Nations team. Coach Richard Agar will have plenty of players to pick from though. The Rhinos haven’t played since the 28th May when they were very impressive thumping Castleford at Wheldon Road 6-60. Their form so far has been a bit patchy to say the least. A last minute drop goal by Huddersfield’s Lee Gaskell saw them defeated 14-13 then a week later another tight match ended in a golden point extra time win at Headingley over Wakefield 15-13. We will have to wait and see if Richard Agar uses any of the players on international duty.

This will certainly be another big test for Salford to try and back up the great work from last week. As I’ve said before a week can be a long time in Rugby League. The gulf between the Hull Kingston Rovers match and the Huddersfield performance couldn’t of been much wider. Let’s hope that confidence is now booming and I am sure the players will get a great reception prior to kick off.

The action gets underway at 1pm.

Both sides come in to this fixture on the back of four defeats with their seasons at a crossroads. Salford […]