Dragons to Strong for Battling Salford.

It was another fine and sunny evening at the AJ Bell Stadium as top of the Catalans arrived. As usual the pitch looked like a newly laid carpet.

The Dragons were not far from full strength with Josh Drinkwater and James Maloney starting in the halves.

Salford coach Richard Marshall made changes to his starting line up after last weekends defeat at Leigh. Tui Lolohea and Chris Atkin replaced Kevin Brown and Ata Hingano at half back. Morgan Escare returned to the side at fullback.

James Greenwood was missing for the Red Devils but Sam Luckley, Oliver Roberts and Ellis Robson all made the bench.

It would be a huge test of Salford’s resolve after playing Super League’s bottom club last time out and tonight facing one of the best sides in the League.

The Dragons enjoyed most of the field position in the opening stages of the game and they scored the first try. Maloney dropped his shoulder and laid a try on a plate for Benjamin Jullien.

Salford continued to work hard and slowly started to find their feet. A neat grubber kick from Lolohea trapped Tomkins in goal. The Dragons defended it stoutly and began to look very solid in defence. 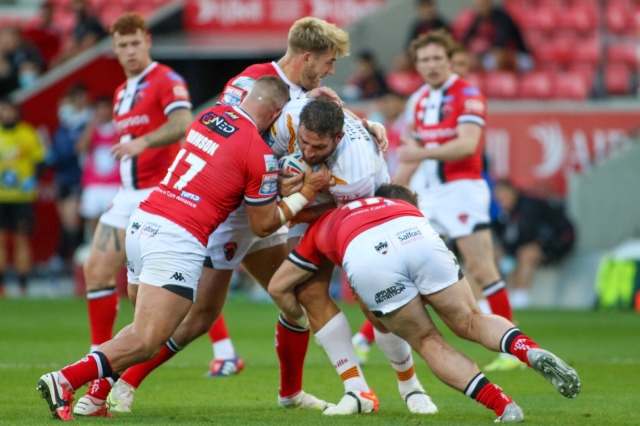 Jullien scored his second try after racing away with the ball from Jack Ormondroyd’s knock on. Maloney converted, 0-10.

The Dragons third try came on the half hour mark when Mickael Goudemand plunged his way over from close range.

Salford eventually got over the line, Harvey Livett hit a great line to take a lovely pass from Lolohea. Livett stormed to the line to touch down with Krisnan Inu converting.

Catalans grabbed another try just before half time as they flexed their muscles. Sam Kasiano was like an Intercity 125 train as hit burst through to score. The sheer size of the Dragons pack was proving difficult for Salford to deal with.

Salford got the start they needed to the second half. Good work from Chris Atkin and Rhys Williams created a real opportunist try for centre Dan Sarginson. 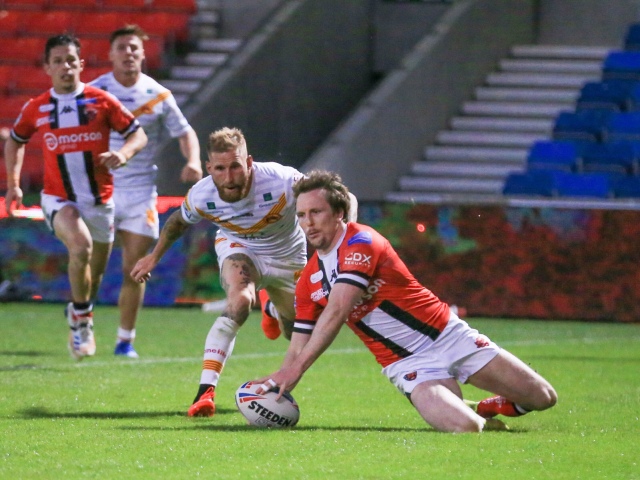 Michael Mcllorum was sent to the sin bin for a high tackle and Salford sniffed a chance to gain a bit more ground as they trailed by twelve points.

Morgan Escare threw a super dummy and the crowd erupted. The referee adjudged an obstruction and the try was ruled out.

James Maloney extended the Dragons lead to fourteen points with a penalty after a high tackle. This took the wind from Salford’s sails and any thoughts of a comeback were firmly put to bed when Dragons winger Tom Davies squeezed in at the corner.

Frenchman Morgan Escare worked hard all night for Salford and eventually got the try he richly deserved. He showed his blistering pace and fantastic feet to slice through the Dragons defence.

Both Salford full back Escare and his opposite number Tomkins had fine games and it was the latter who set up the final try of the match on the hooter. Samisoni Langi went over and Maloney rounded off the scoring.

A much improved performance from the Red Devils who are back at the AJ Bell Stadium on bank holiday Monday to face Hull.

Another Special Away Day For Super Salford.

With just four matches remaining the race for the top five is more exciting than ever. St. Helens are clear […]

Both sides enjoyed fantastic victories in round one. Salford’s win at Huddersfield there first opening round victory since 2014. London […]