When these two sides met in June they served up a match full of action and talking points. Salford came up with a great result against the odds after having Jame Greenwood sent off. We know now that the sending off was a case of mistaken identity but still Richard Marshall’s side showed an incredible amount of resilience to win the match.

After a disappointing start to the season Ian Watson is beginning to make his mark with the Giants but they are still a way off where they expected to be.

In his time at Salford Watson worked wonders under limited resources. The club achieved plenty of respect and admiration. Players came in without much fuss or fanfare but they moulded into a team that could compete. The 2019 season is one the supporters will never forget. Last year a few matches into the season the game was put on hold due to the state of the nation under the pandemic. Salford reached Wembley against the odds for the first time in fifty one years. It was such a cruel blow to the supporters missing out on such a historical occasion.

Many Salford supporters were disappointed in the way Watson left the club but I think he should be remembered for the great occasions he brought to the club and the sense of pride that everyone associated with Salford Red Devils felt over recent years. Players and coaches move on in sport that is how it works. I am not naive though and understand how people feel.

Their is now doubt this will all add spice to Friday’s fixture but that’s what makes sport so exciting.

The Red Devils began a new era in 2021 under Richard Marshall and its been far from plain sailing up to now. Given time and a bit of patience I am convinced both Watson and Marshall can succeed at their respective clubs.

Here are a selection of players who have played for both clubs;

A miserable start too the 2013 season saw three straight defeats conceding forty points in each of them. Going in to this match Salford had won just one win in their opening eight matches with a draw at Wakefield giving us just three league points.

Alan Hunte was in charge as Salford’s interim coach after Phil Veivers had been sacked a few weeks earlier. Hunte had over seen the 23-23 draw at Wakefield and 14-10 defeat at St. Helens in atrocious weather conditions.

Huddersfield were flying high in the Super League coming in to this encounter while Salford were rock bottom.

It was Easter rugby league at its best in this Good Friday encounter which was full of incident and excitement.

Hunte had worked wonders with the Salford youth system nurturing the young talent at the club. Niall Evalds, Theo Fages, Gareth Owen and Marc Sneyd were all making their way in the first team. It was that man Sneyd that won the match though with a cool, calm drop goal six minutes from time. From an early age you could see the way Sneyd thought about the game with his clever kicking game and fantastic organisational play. 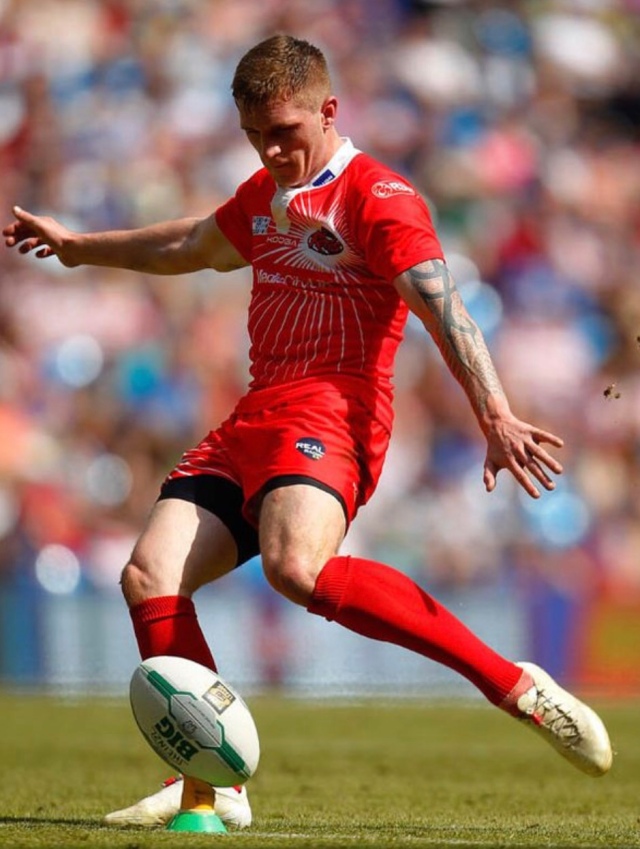 Huddersfield went on to finish top of the league in 2013 winning the League Leaders Shield. After a season of turmoil Salford ended bottom with just six wins from twenty seven matches.

It’s been a very busy week off the field for Salford. The news of Lee Mossop’s immediate retirement on Monday was a blow. Lee arrived at Salford for the start of the 2017 season and has given fantastic service to the club. His shoulder problem is nothing new and he’s suffered for a long while now playing through the pain barrier. After the advice from his consultant he has decided now is the time. I am sure everyone associated with the club will wish Lee and his family all the very best for the future.

Lee Mossop has given great service to Salford.

Another news story also broke this week with Salford winning the race to sign Australian half back Brodie Croft. The twenty four year old has signed a two year deal with the Red Devils and his performances this season with his current club Brisbane Broncos make him a very exciting addition for 2022.

Looking forward to Friday’s match and our visitors Huddersfield have won their last three matches in Super League. Will Pryce has caught the eye with some terrific performances recently. The 18-year-old son of former Great Britain international Leon Pryce looks set to have a huge future in Rugby League and he will be one to watch this week.

Looking back to last Friday and yet again Salford struggled to create much attacking opportunities. Wigan’s try line was very rarely threatened throughout the match and the will be a concern for coach Richard Marshall. Marshall needs to decide on his best half back combination. At one point last week Ata Hingano, Chris Atkin, Tui Lolohea and Kevin Brown were all on the pitch.

When the two sides met in June it was a very physical encounter with both packs going toe to toe. This can be expected once again on Friday night. With restrictions now lifted and no limits on crowds anymore it promises to be an electric atmosphere prior to kick off.

The action gets underway at 7:30pm.

Paul Whiteside interviews Head Coach Ian Watson after our second away victory at Warrington Wolves. Make sure you get down […]

Today I caught up with Salford coach Richard Marshall as he looked ahead to Friday’s match with Huddersfield. We discuss […]